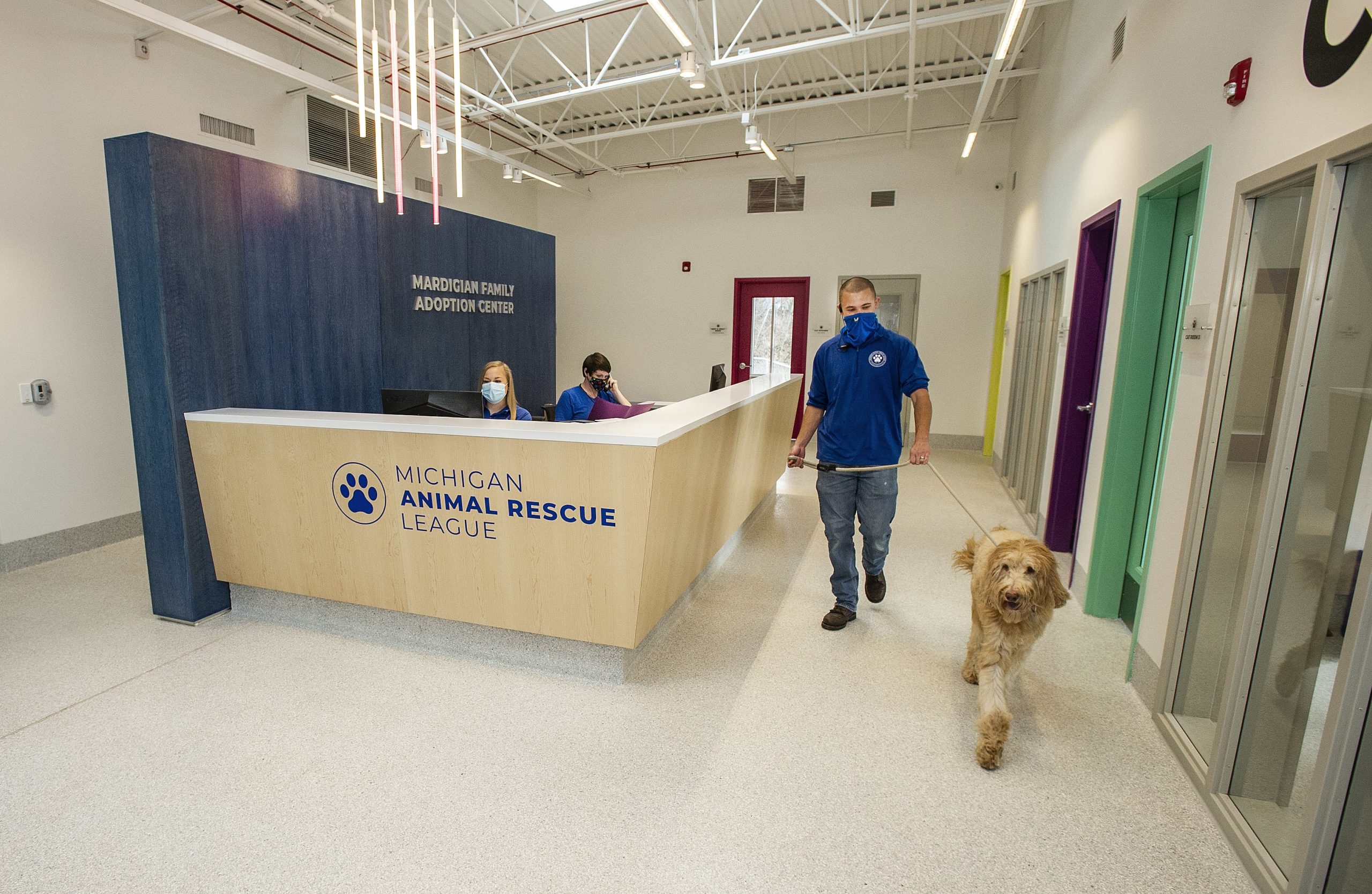 Written by Natalie Broda for the Oakland Press, December 3rd 2020

It’s a project decades in the making that has doubled the shelter’s space for cats and dogs. Demolition on the then 65-year-old building at 790 Featherstone Road began in June 2019. A new 15,000 square-foot facility was built in its place. The employees and animals moved in this October. “It’s been a really long process, but seeing it all come together was really exciting and cool,” Magee Humes, executive director of the MARL, said. “The day the animals moved in was nothing short of amazing. It was so nice to see all the dogs and cats immediately vibing, wagging their tails or climbing to sit in the sun. It brought us to tears.” The new building is three times the size of the old shelter and can house up to 100 cats and between 60 to 70 dogs at one time. It includes an on-site medical center staffed by a veterinarian, which will help increase the shelter’s efficiency and decrease the stress of transporting animals to outside medical care.

Dogs now have 24-hour indoor/outdoor access and special climbing perches near windows were installed for the cats, among other play-time amenities. A more front-facing welcome space was also built for those who come to the shelter to adopt or surrender animals. “We wanted to counteract the idea that this is a sad place, so we made it bright and airy and a place that people would want to visit,” Magee said.

In spring at the beginning of the pandemic, the shelter saw a slow-down in the number of animal surrenders it was receiving. Simultaneously, there was an uptick in interest to adopt or foster animals. Both have somewhat tapered off to lower levels this winter, but the need to care for and house local animals is still high, according to Magee.

“Now that we’re settling in, the real work begins. We’re still taking in animals and adoptions but only by appointment, which is actually kind of nice, because now all our guests get a VIP treatment,” she said. “We’re taking a lot of safety precautions, and cleaning is something we’ve always been good at in animal welfare. Our goal is to make this a good home in 2021.”

There is no off-season in Animal Welfare

Just 3 days into the new year, Bruno was rushed to the emergency vet. He was extremely lethargic, unable to eat, drink, or go to the bathroom, and couldn't stand up on his own. Bruno was diagnosed... Read More

Malcolm's Adoption Featured by the Dodo

Yappy Hour Returns this Year as a Fall Event

Written June 12, 2021 by Taylor K. Truszkowski for Rochester Media For the first time since 2019, the Michigan Animal Rescue League will host their in-person Yappy Hour event at the Rock Garden at Meadow Brook Hall... Read More